A couple of months ago, we filed a public records request for some information about the trash franchises that Waste Pro holds with both the City of Crestview and Santa Rosa County.

True to form, the folks over at Waste Pro immediately sued us to keep those records, which they hold, a secret.

Remember, these are records that belong to you – the taxpayer. Once a local government creates a government-sponsored monopoly forcing you to do business with a particular company at a particular price for a necessary service, the monopoly holder becomes subject to the sunshine laws here in Florida.

Or, at least, that’s what we at Adams Sanitation understood to be the law.

Good news, Judge Dickey in Santa Rosa County agreed! Assuming Waste Pro complies with the court order- and we assume they will, after all, Waste Pro filed the lawsuit, we’ll share those records with you.

this is a big win for the public’s right to public records. Waste Pro’s lawsuits in response to both public records requests were an end-run around Florida’s cherished Sunshine and Public Records laws. If Waste Pro had prevailed, it would have meant that any citizen could be sued and liable for attorney’s fees just for daring to ask their local government (or a franchisee working for the government) for a record the citizen believed to be public.

We are confident Judge Brown in Okaloosa County will ultimately come to the same conclusion on the Crestview request that Judge Dickey did in Santa Rosa County.

Sunshine makes everything clearer for everyone! Thanks, Florida Lawmakers!

What This Means For You, The Taxpayer, and Trash Customer

Well, first, your right to access public records has been upheld, and that is VERY important. We are just glad Waste Pro sued us rather than a well-meaning citizen making a records request who might not have been willing to endure the cost and aggravation of an expensive legal battle.

Second, we’ll get access (and so will you) to records about the service being provided by Waste Pro in South Santa Rosa County. . We are particularly interested to see how much Waste Pro’s profit margin expanded after they finagled their sweetheart, no-bid contract a couple of years ago that increased cost and reduced service for county residents.

What this does not do is give us the right to service South Santa Rosa County citizens… yet. The matter of our permit will be coming back before the Santa Rosa County Commission on September 8th. Stay tuned – much more to come on that front soon.

A sneak peek at us looking through the records to see just how much extra money Waste Pro is making with their deal. 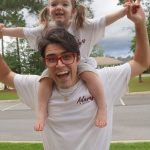