Recycling Update: Mid October is the expected return to recycling

Starting Recycling Back Up

Well, we FINALLY have an estimated date that ECUA’s Cantonment Facility will begin to take recycling again!

They have let us know that they expect to be operational and ready to take your recyclables by Mid-October.

As you might have heard, their recycling facility suffered a fire a couple of months ago – and they’ve been working to get it back online ever since.

They have also let us know they’ve made several updates to their facility to improve their recycling processes.

We will keep you up to date as we get more information on the situation!

As for our customers who have been paying for recycling while not being able to utilize it properly during the fire, we will reimburse you for your recycling bill as soon as the facility reopens. This way we can reimburse you all in one swoop!

We’re near the finish line on this whole episode – thank you for bearing with us through it!

TRASH WARS: THEY AIN’T FOR THE FAINT OF HEART​

Share on facebook Share! Share on linkedin Share! Share on twitter Tweet! Share on pinterest Pin! Share on reddit Share! Share on email Share! Share on print Print! Trash Wars: They Ain’t for the faint of heart We’ve all had at least one of ‘em – Mine was playing high school lacrosse (I definitely was not big enough for football or fast enough for soccer. It also helped that I just flat out love to play lacrosse).    A call didn’t go our way going into the end of the game against our rivals, Mt. Paran. A guy on the other team took a swing at one of our (superstar) freshman and the refs either didn’t see it or didn’t call it. It stung, and made us mad – we hopped on the field, led by that freshman’s older brother, ready to fight. We didn’t get the call and we lost the game. Our team had two options coming out of the smelly, undersized lockers they provided for us visitors that day:    Feel sorry for ourselves and say we should have won.  Pick ourselves up, dust ourselves off, and get ready to whip ‘em the next time they came around.    It was a quiet bus ride home as the younger guys on the team (I was the only senior) made up their minds as to what they were going to do.    I was curious just how it went the next four years, so I looked it up. In the next four years we played them, we beat Mount Paran every time, by a combined score of 64-20 (that’s equivalent to four blowout victories of 16-5).    Suffice it to say, the guys chose option 2.    The Bad News: Great story, trash marketing guy, but what does this have to do with Adams Sanitation?   As you know our friends at Waste Pro sued us recently and today they won a temporary injunction that prohibits us from servicing the south end of Santa Rosa County until all the legal wrangling is concluded.     This doesn’t mean the fight is over, though.    The judge refused Waste Pro’s request to stop us from advertising or marketing to the residents in the south end, and he made it clear that he wasn’t drawing any conclusions on the ultimate facts of the case.     He just believes that the County needs to issue a permit for us to operate before that can happen and we have to complete the process of forcing the County to face-up to the fact that the Waste Pro contract was improperly awarded for that to happen.   Now the Good News: Today’s ruling made really clear to us that this is going to be a tough fight, but the nearly three-hour long hearing revealed that the ground supporting up the Santa Rosa -Waste Pro deal is every bit as shaky as we thought it was, maybe more so.  So, what does this mean for customers in the South End of Santa Rosa County?   You will be forced, once again, to use Waste Pro as your trash hauler with once weekly service. We will finish out your twice weekly service this week. And Waste Pro will recommence providing you service once a week next week on your regular Waste Pro service day.   Please hold on to your Adams trash cart If you can stick with us as we work through the legal process, we would be grateful. We will credit your account for half a month’s service for October. If you can’t, we do understand and we will refund you your money, including your cart deposit and delivery fee as well as half of your October monthly payment. Just email Info@AdamsSanitation.com to make the request.     What is Adams Sanitation Going to Do to Make it Right   We’re not done fighting for you. This isn’t over by a long shot, and we’ve budgeted the lawyerin’ money to take this to the end. We started this fight because we truly believe that even if you don’t take our service, you are entitled as an American to a free market system and to a local government that follows its own rules and acts in the best interest of tax payers. We are going to refund you your money for half of the October service  that you will not receive– It’s the right thing to do, and we’re interested in doing the right thing (see point 1) North County Residents – We are offering you a chance to take in refugee carts from the south end by starting service with us. As part of our commitment to continue this fight – We are waiving the security deposit (a $25 value) for you, should you decide to sign up with us in the month of October, just use the code #FreeSSR when you sign-up on our website.     Christopher Saul is the Chief Marketing Officer for Adams Sanitation. When he isn’t slinging hot garbage from the keyboard – he is spending time with his family. He also likes to watch his SMU Mustangs play football and basketball.  Sign up for our newsletter! Facebook Instagram Youtube Linkedin Recycling is back in Northwest Florida – here is what it means for you as an Adams Sanitation Customer. 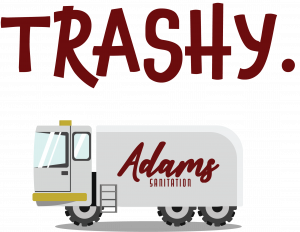 How You Can Help Us Keep the Streets Clean

Hey Everyone – We want to keep your neighborhoods as clean and tidy as possible! Help us by doing a couple of simple things:

🌬 While we try to get it all – loose trash can fly away – especially if its in the back of one of our trucks (we really do try to get it – but we aren’t perfect either!)